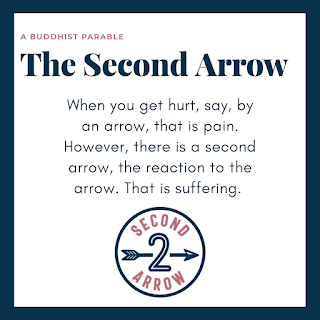 There is a Buddhist parable referred to as The Second Arrow. This story is about the Buddha asking one of his students, “If a person is struck by an arrow, is it painful?” The student replied , “It is.” The Buddha asked, “If the person is struck by a second arrow, is that even more painful?” The student replied again, “It is.” The Buddha then explained, “In life, we cannot always control the first arrow. However, the second arrow is our reaction to the first, and with this second arrow comes the possibility of choice.” Another way to state it: pain is inevitable, suffering is optional.

As a psychotherapist I see the fall out daily of people who suffer from the second arrow. This second arrow represents our reaction to a negative event. The second arrow can make the event much worse by the way we react. Sometimes when things happen, we can manage to get through it simply by how we react. For instance, let's say you lost your job. That is the first arrow. Ouch, you were not expecting that and it is painful and scary. Now here comes an opportunity to figure out what you do next. Do you want to stay home, drink and smoke weed and feel sorry for yourself?

The Buddha said, “We cling to diversions, rather than observing what is actually present, the arising and passing of feelings.” Basically, we avoid pain in ways that create suffering. So to avoid the fact that you lost your job, let's say you get stoned or drink all the time during this period. You watch TV for a distraction or maybe play games on your phone and game console and the next thing you know, your bills are due. You may find that you lose your car and get kicked out of your place. You begin to drink a little more, and use distractions to avoid work on a solution.

Soon you are suffering and are mad at the world because you lost your job. Then you internalize it and that my friends is the second arrow and it is the reaction to how you are going to deal with the loss of the job, which was the first arrow, drinking, drugging, watching TV, not doing anything to get a new job and hating yourself for it, well that my friend is the second arrow and it is a choice.

I get it, none of us want to suffer or feel the pain but I have to tell you that being able to accept and work through discomfort and pain will help you in the long run and help move you away from the pain and suffering. Dodging the bullet, or as we Buddhist say, avoiding the second arrow. The second arrow, unlike the first, is controllable. It is anguish caused by your thoughts after a hurtful blow takes place.

So, instead of working through the pain and discomfort of the first arrow, you find yourself adding pain and I get that it that it is far easier to go to the land of self medication where we use food, sex, TV, self-imposed punishment, weed, drugs like opioids or psychostimulants such as cocaine and amphetamines. Oh and the big one, Video games or role playing games which can be especially seductive, because they offer an alternative fantasy world that someone can immerse themselves in, as a way to isolate themselves from the world. Avoidance causes great suffering. 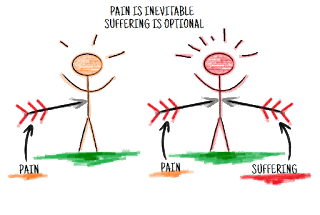 I tell my clients that we need to try to move forward by embracing the discomfort and using it as a tool to learn how to cope in healthy ways rather than letting the second arrow cause you more pain. Basically, the best response we have to avoid the second arrow is learn how to respond positively not react negatively.

So the best way to dodge the arrow is Self-awareness. Be aware an event happened and it caused pain. Ask yourself a few questions like, are you willing to find space in your heart to go towards that pain with love and acceptance? Are you willing to embrace what’s going on with some kind of compassion for yourself? Can you let go of judgments of yourself and others? This clearly would be the beginning to stopping the second arrow. Looking at the event with love in your heart not anger and resentment.

When you start to feel sorry for yourself and go on and on about how you were wronged, or how awful life is, you sink into a hole and suffer because you lack love for yourself. Facing bad things or the first arrow head-on with love, you will see the positive results much more quickly.

Look at that pain. You have to remember that the second arrow never flies unless you resist the first. By resisting, you don’t help the situation. Your anger, disappointment, hurt, stress and worry only gets worse if you turn the second arrow inward. Rather than suffering and being angry and telling yourself you can't do anything, start to acknowledge the sensations of the first arrow without judgment.

Though it’s uncomfortable to experience, resisting what is happening or pretending it’s not there or there is nothing you can do and people are out to screw you over, doesn’t make it go away. Try leaning into your growth, by taking action. How many times have I heard it rendered me helpless, or I feel paralyzed. Yup that is because you decided to go ahead and let the second arrow hit you.

Look you are going to get struck with the first arrow often in life because things happen. It is part of life. The first arrow is going to strike. Here is the thing, do you have what it takes to stop the second arrow? Can you work towards the solution instead of staying in the problem? Can you stop the negative self-talk and find positive ways to get through it? I want you all to consider this, what would it look like to bring an open heart and a whole lotta love to the situation?

Think about it it, pain is inevitable that is the first arrow, but suffering which is the second arrow, that my friends is a choice. For now…this is Tyler Woods saying walk in peace.